The Kingfisher is the emblem of the Healer Foundation, who, among many other things have set up a trauma release sequence called F.A.B. Freedom From Abuse and Bullying. This is evolving as a free service to help people suffering from any of these things.

It is called the 5As Sequence and works through connecting groups of chakras (including 18 situated around the body).
The recipient connects by colouring in a group of rings in a pattern which gives the practitioner an insight into areas where problems lie. The Sequence is proving to be very useful in helping children of all ages, as well as adults. The Healer Foundation is affiliated to the British Complementary Medicine Association. www.healerfoundation.co.uk
Bullying affects a person in many ways, it may be very subtle gradually controlling who a person meets or speaks to, and where they can go. We generally refer to this as emotional blackmail. Physical bullying can be more obvious, I once had a friend who always wore a lot of makeup and I wondered why because on some occasions it seemed unsuitable, however, it was done to cover the bruises she was receiving from her husband. She became very ill and refused treatment because for her death was a release.
For children apart from school situations they now have to contend with cyber control: in some of these cases the controlling person or persons may be someone they do not even know, but at a time in their lives when they are building confidence in their abilities and appearance, they can be very vulnerable.

BEREAVEMENT.
One of the deepest traumas that we all experience in our lives is bereavement. It can come in many forms and with indefinite timeframes, at the end of the day, it is an expression of grief.
The manner in which the bereavement presents differs from situations. If a loved one has been ill for some time there is a degree of preparation for the loss, but if an accident or sudden illness is the cause, there is shock and complete disbelief (my own husband suffered a severe stroke whilst in bed asleep at the age of 61). There are feelings that this cannot be happening: and there can be a period of time when one is in a zombie-like existence having no sense of functioning even though the daily tasks go on. We alternate between feelings of anger and guilt and even fear ( should I have done something differently). There may be an impression that the bereaved one is coping but often they have no choice, it is just methodical, emotions have shut down.
Those that have a young family to look after would need help, they need to be treated with patience and guided towards those that can help with legalities, possible debt and lack of income, and possibly child care. All who experience bereavement in this way will have to deal with legalities and this can bring on very genuine fear. I was fortunate that my grown-up children dealt with all those things. There was also a feeling of loss of status as a widow, although that is a temporary thing it is another mental and emotional component of the loss. The one thing you must do is ask for help.
There can also be a sense of isolation, even if there are family members around. To return to a home that no longer contains that loved one, can bring on a sense of emptiness that is as individual as people are. If the loss is a child I cannot imagine how totally unbearable that would be and would certainly recommend that professional help and counselling must be sought.
The loss of a pet is another aspect that many people may not understand. However, that pet may be the only thing that gives a person unconditional love and it too leaves a gap in peoples’ lives that sometimes, for various reasons, cannot be filled. If it was a dog or cat (or any animal) that was taken to events it could mean that a person’s social life comes to a stop. That, then, could mean that their mental health was affected. I trained in Pet Bereavement many years ago and became very aware of the intensity of the feelings held by many pet owners, myself included. A Pet Bereavement helpline is run by The Blue Cross
Yet another very serious bereavement is the loss of job or business.
This is so relevant today in 2020 as we battle with the Corona Virus Pandemic. The fear that is experienced when faced with reduced income, or indeed no income, is as serious as the recognised loss of loved ones. To be faced with debt and knowing that there are responsibilities can be mind-blowing. If the loss has come from no fault of your own there is at least no need for guilt, but if mistakes have been made, or you have put your trust in someone that proved unreliable, the sense of guilt and stupidity can be overwhelming and bring on very serious mental health problems and once again professional help must be sought. The Citizens Advice Bureau can advise on where to get Debt Management help because it is very important that a genuine organisation is used.

Sometimes when people have lost a partner the sense of loneliness is so great that they enter into a new relationship quite quickly. This can cause resentment by other family members, especially when there are children involved. It has to be understood that each person has their own way of dealing with loss: and whilst it is easy to judge from the sidelines nobody really knows how another person is feeling and each of us has the right to make our own decisions. If that decision proves wrong then it is the individual’s mistake to be dealt with in their own way.

In the years around the time of my husband’s death I used to help out at a rescue kennel near to where I lived. Another person that helped with fundraising was the lovely Frank Bruno. He lived close by and was well known in the area as a kind and friendly man. It is well known that he has suffered from mental problems for quite a few years and the strain it put on his life – it is very difficult for people who are constantly in the public eye. Now many prominent figures are coming forward with their stories. Frank has written a book called ‘Let Me Be Frank’ recording his journey and now concentrates on helping others with mental problems. He has set up a foundation ‘The Frank Bruno Foundation www.thefrankbrunofoundation.co.uk.

There are no set time-frames for healing grief in whatever form it takes. We are each individual: and be aware that one minute we are OK and then the next minute the fears return. BE KIND TO YOURSELF, GET HELP AND COUNSELLING, DO NOT BOTTLE THINGS UP INSIDE, TALK TO PEOPLE. 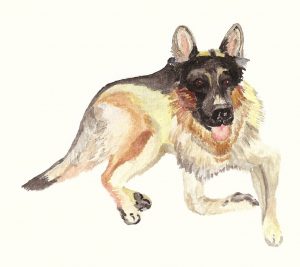 I leave you with a picture of one of the dogs that comforted me through some very difficult times.

Recently I have been contacted by The Global Remote Healing Network who send out distant healing to anyone in need and their pets. Remote or ‘Distant’ healing can work just as well as touch healing to contact them https://distant-healers.org

For readers in the U.S.A, Everlast Recovery has an article called Complete Guide to Understanding Bullying in the Modern Age. (All you need to know about bullying and its consequences) Check out https://everlastrecovery.com/understanding-bullying

Again from the U.S.A information on educational resources https://www.psychologydegrees.org and https://www.socialworkdegrees.org. contact-Cheri Shallenberger with Mental Health Explorer
Also for building Mindfulness and a Holistic lifestyle www.sanctuaryoftransformation.com.
For those suffering addictions. addictiongroup.org/addiction

"Psychic Art -
How it can help you"
Download Now >>

The Spiritual Development School
For a better standard of teaching